The ditch between the car park & field was getting overgrown so some of the members decided do something about it instead of flying the afternoon. 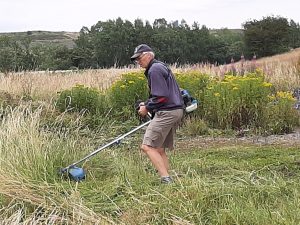 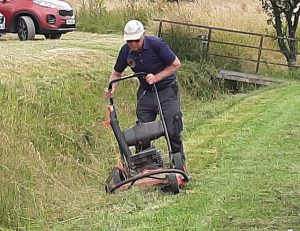 Terry had brought his strimmer, so he & Graham started to tackle the long grass, while Allan followed behind cutting it shorter 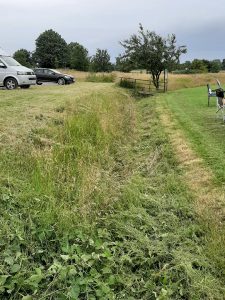 It still needs a little more work to clear the bottom of the ditch, probably using weed killer

After toiling for a couple of hours we all (except Jim ??) gathered in the welfare cabin for a BBQ 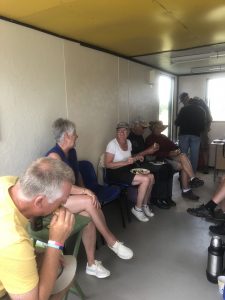 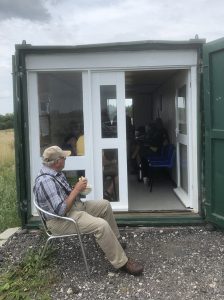 Thanks to all the helpers – a job well done

Northern Area Fly-In
By Terry Lee Sunday 14 July
Over 50 models & their pilots attended the ‘2019 Northern area fly-in’ organised by members of the Northern area club members & hosted by Pandas at their flying site. 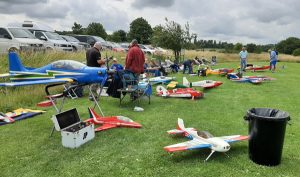 The weather was fine & dry with a light easterly wind & intermittent periods of warm sunshine. The models varied from very large turbine powered glider & a turbo prop Tucano down to a tiny 12″ electric model. Modellers came from as far as the east coast & Cumbria as well as many local clubs. 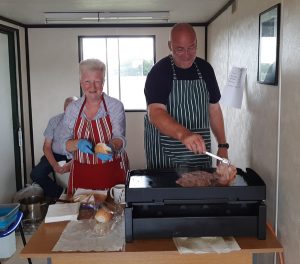 Refreshments were provided by the northern area BMFA – free to all participants in exchange for a donation to our charity ‘The air ambulance’ The chefs were Tim & Sue Haigh from the Huddersfield club. They provided bacon & sausage baps for breakfast with hot beef sandwiches at lunch time all washed down with tea, coffee or soft drinks.
Thank you to everyone who attended and helped to run the BMFA Northern Area Fly-In event today. Even these relatively small events take some organising and require people to run them. Thank you to the PANDAS members and the BMFA Northern Area Committee members, who gave their time to make the day a successful one. We raised £160.00 for the ‘Yorkshire Air Ambulance’, making a total of £300.00 so far this year, from PANDAS. This will be donated at the end of the year.

……………………………………………………………………………………………………………………..
Armed Forces Day Demonstration
By Terry Lee Saturday 6th July
Four club members erected the club marquee on the Friday evening prior to the show. The following morning the same four members (Martin, Terry, Chris & Andrew) arrived at the park at 8.00 am to assemble the models in & around the marquee to show off to the best advantage. The day dawned cool & overcast, but later we had the sunshine which brought in the crowds. We were kept busy all day answering the many questions including one or two possible new members. . 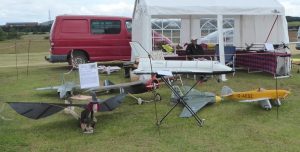 View of some of the display from left hand side.

Smaller models were set out on the tables inside the marquee, & larger ones on the outside. During the day we had displays from a Spitfire, & a free fall parachute team. Also some of the models were flown in front of the appreciative crowd.
——————————————————————————–

All Electric event
By John Thompson Saturday 18th May
Saturday morning dawned at my house with drizzle and a weather forecast that was not hopeful. However as I left Kirklees the rain stopped, although heavy clouds were in evidence. On reaching the field at 9.00 I was surprised to see the barriers being erected, thanks to our stalwarts, and even a bit of flying taking place. Although the outlook looked dull there was no wind, a first as I recall for 16 years! We soon had a dozen pilots signed in, and more arrived during the day, and the array of models was amazing. Even indoor foamies were enjoying the calm atmosphere, a ‘Fokker Triplane’ was even doing knife edge loops! Gordon Warburton flew his new quarter scale Taylorcraft in a realistic slow manner, and ducted fans were beating up the patch. My ME163 was missing this year as my house move and some medical problems had prevented me from flying at Pontefract beforehand. No helicopters were seen but one dreaded (only joking David) quad flew later. The Eric Johnson award, given every year to a PANDAS member, has no rules but is presented to someone who has shown skills and/or helped out or whatever. Therefore the trophy was presented to Sheila, who has not only become a competant pilot, but has served this club in may ways over the years. 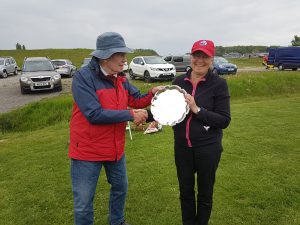 The event this year attracted an initial entry of 17 flyers (with 12 finishers, details below). The event also attracted a good number of visitors and other club members.

Hopefully this was in part, due to the PANDAS committee and members efforts, to promote the event with other local clubs and on social media.

I am sure, the fact that the weather was good too, may have played its part.

We have been looking for some time for a grass cutting solution that would suit our pockets. When the council were asked to quote last year, we had a quote of around £2000 for the year. Upon asking again this year, it transpires that the quote was for a larger area on the flying site than we actually needed, & an area as big again for the control line area. This to be cut 16 times per year. This time we gave them an accurate cutting plan (see below) 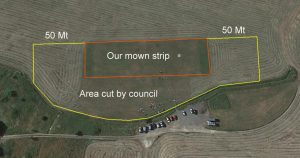 The control line area is only used for two competitions per year, & it was thought that £1000 per comp. was excessive. We therefore decided not to have that area cut by the council, & we would cut it only as required. The council cutting team also thought that 16 times was too much. We agreed that 10 times per year would by ample for the pits & seating area. This new cutting plan has resulted in a cost of £260 for the year! 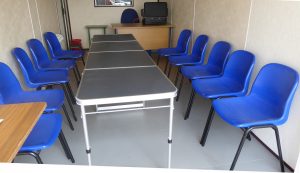 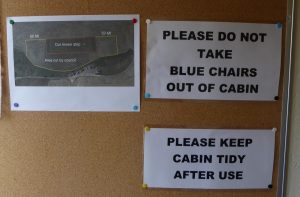 Please do not take the chairs out of the cabin to be used on the field, there are plenty

of chairs in the other cabin for use outside. After use, please sweep out the cabin

Between then they brought 35 or so models of which 22 entered the competition. 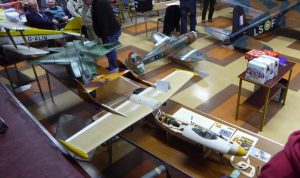 The top ten scores were:- 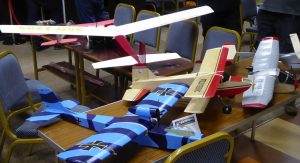 The top four received prizes of cans of beer or boxes of biscuits. 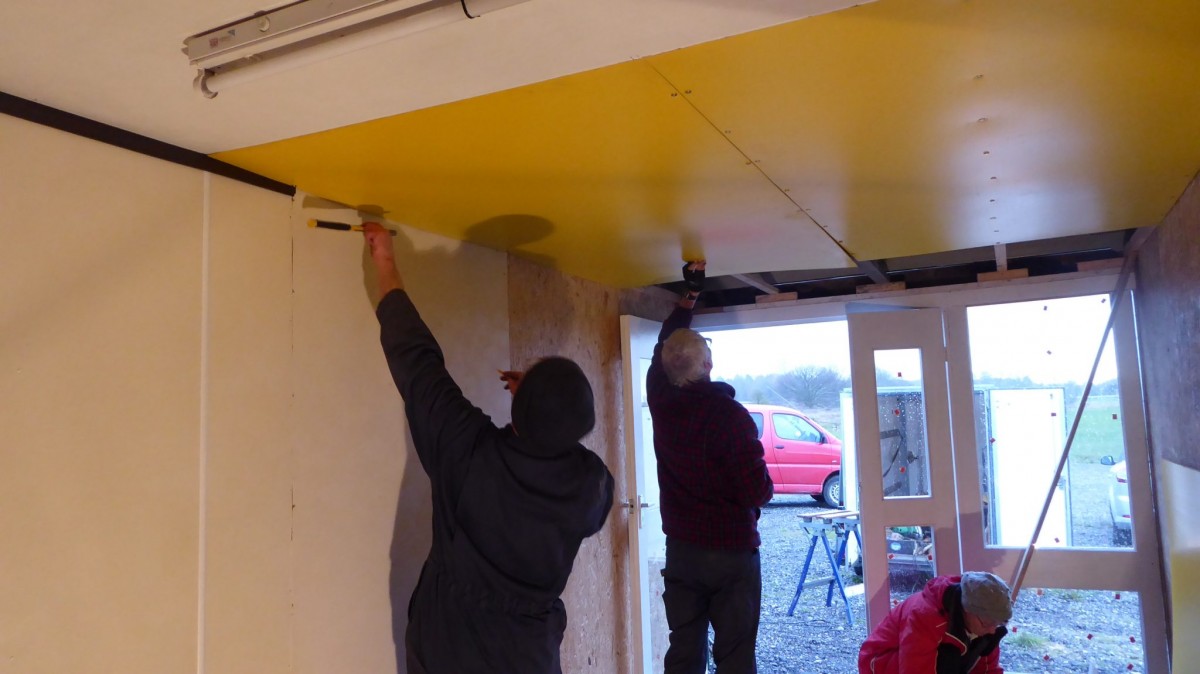 Doors & windows have now been glazed.

Walls & ceiling are being lined for improved insulation & light reflection. 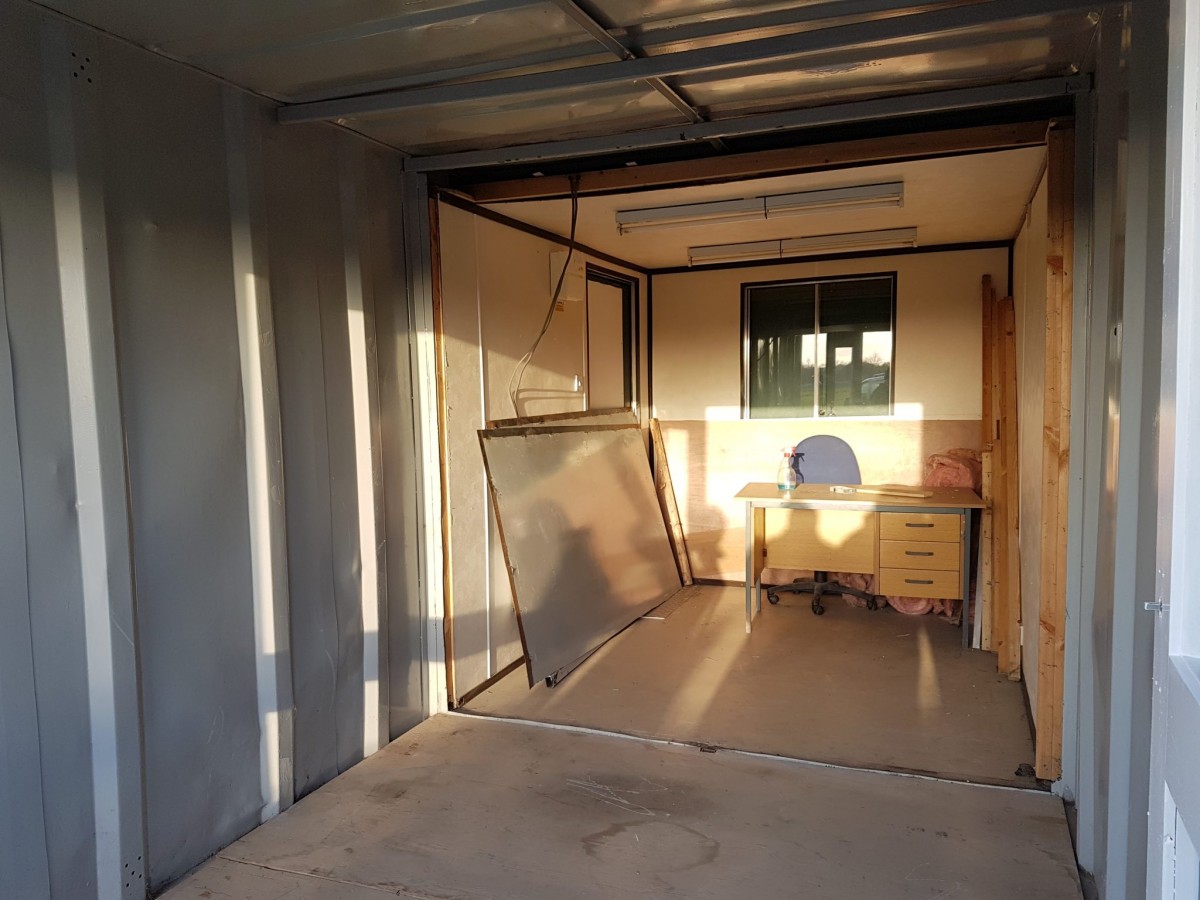 After much grinding & sawing, the dividing partition has been removed, giving us much more room to shelter on a wet day. 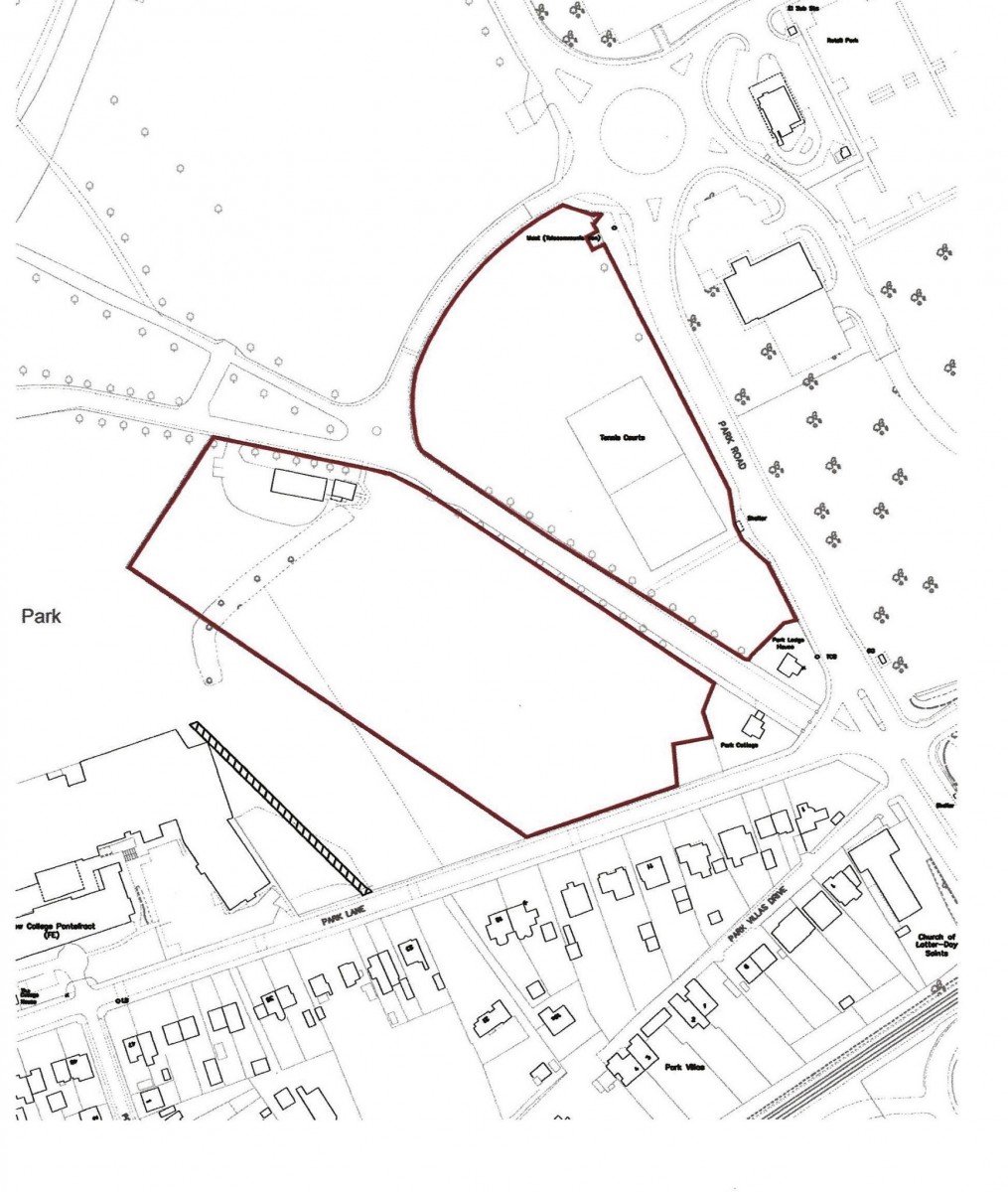 The council are proposing to build a ‘Leisure Hub’ in the park. It is to be situated alongside the old entry road (see red outline) so it should not affect our flying site. 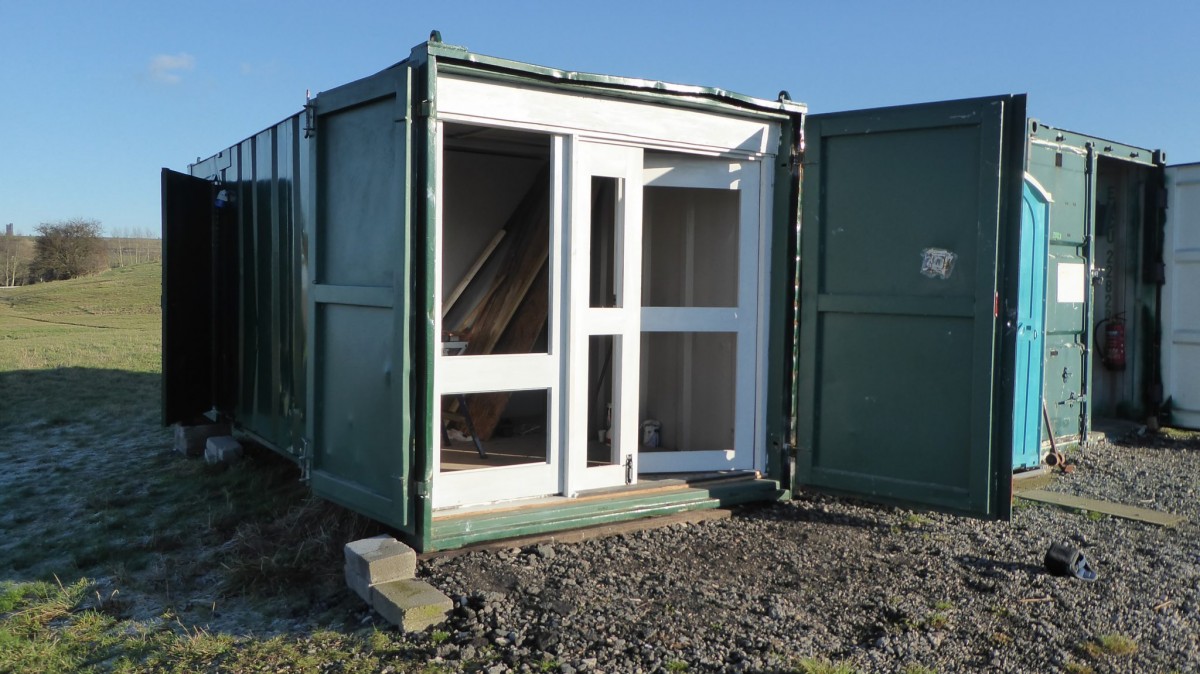 The cabin has been repaired over the months of December & January – repair of doors, locks & flooring. The proposed inner wall/doors has been fitted & is now ready for glazing. 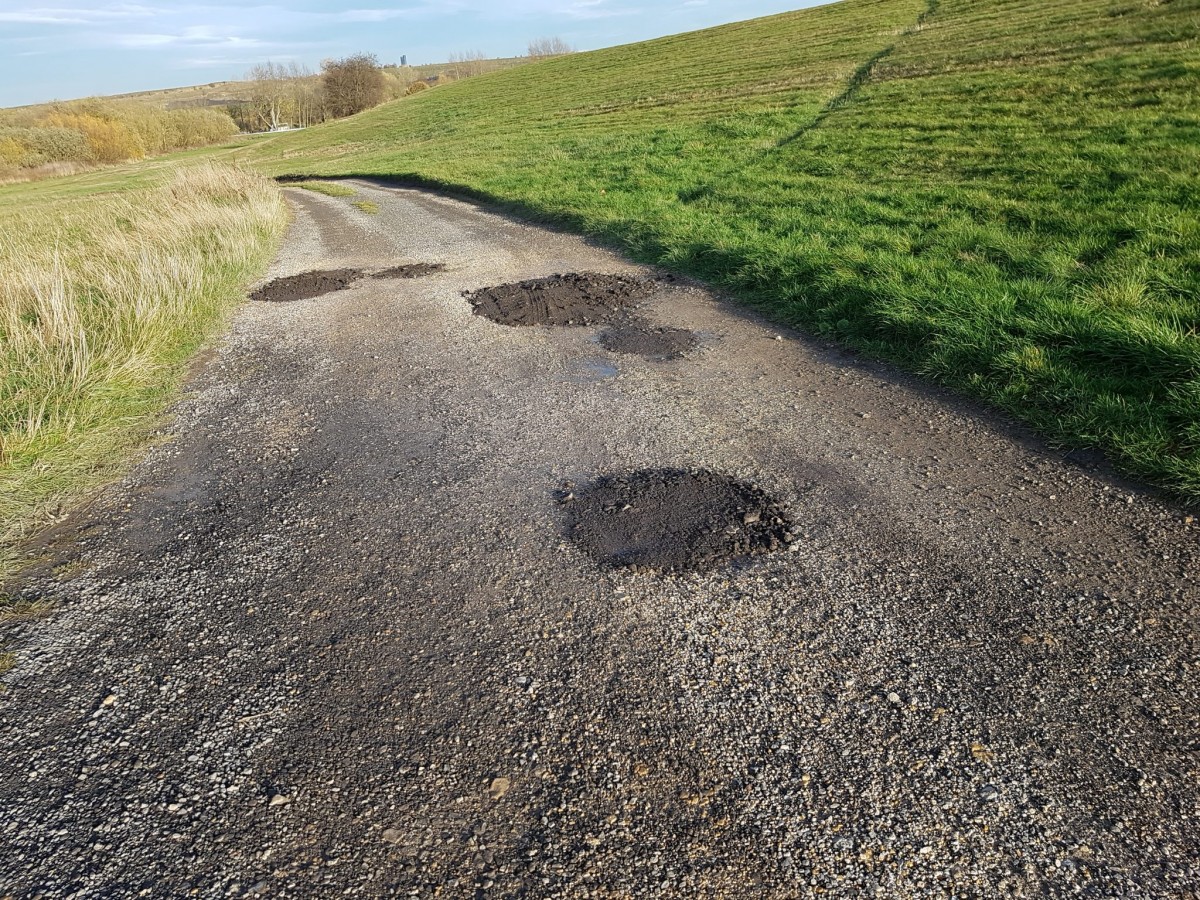 On a dismal Wednesday when it was too bad for flying, some of the members brought shovels & spades instead of models.

They set to work on the pile of scalpings & filled in all the potholes on two stretches of access road. The task was completed in a couple of hours. Thanks go to the dozen or so keen members who helped.

After filling all the holes we still have a fair amount of scalpings remaining. 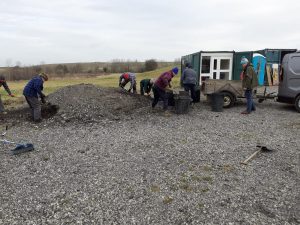 As it wasn’t fit to fly, 10 club members brought shovels instead of models. Dustbins were filled with scalpings & loaded on to the trailer to be transported. 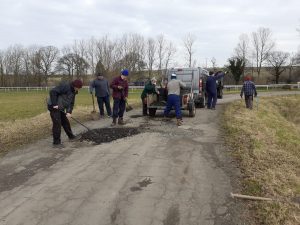 The scalpings were then taken to the various potholes which were filled, raked level & then tamped down with the ‘wacker plate’.

Thanks to all those who came to help.